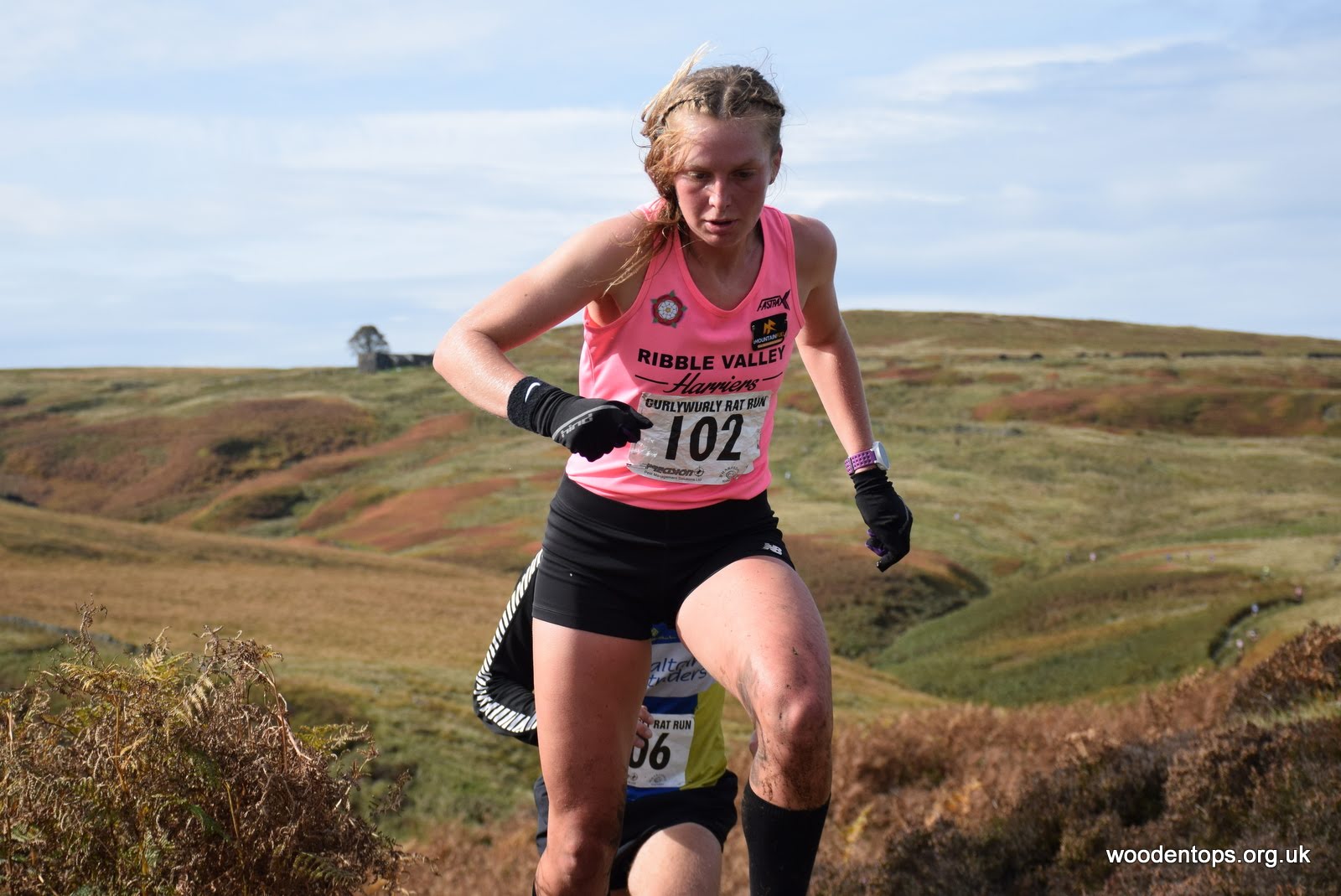 Temperatures tumbled along with course records at this year’s Withins Skyline race and junior “Curly Wurly Rat Run” races.  The first ground frost of the season, in addition to the very long dry summer turned the usual man eating bogs into little more than muddy patches on the outward route towards The Stoop for the senior race and made the ground hard and fast going for the junior races.

However, frost on the ground meant sun in the sky to warm the bodies of each and every runner as they performed their own miracles to finish these tough races.

Ribble Valley’s Callum Davidson took the title in the men’s race (41.51).  After the race he said it was a hard race over hard ground but had enjoyed it.  Ilkley Harriers’ Nathan Edmondson crossed the line in 2nd place (42.22) from Ribble Valley’s Tom Corrigan, 3rd, (43.00).

Crossing the finish line in an amazing 10th place overall, Ribble Valley’s Nicola Jackson won the ladies race (45.44), breaking the 2015 record set by Lindsey Brindle by over a minute.  When she learned of the new record she was surprised and giddy with amazement at her achievement.  Ribble Valley went on to steal the show in the ladies race as 2nd and 3rd ladies were Helen Glover (47.13) and Caitlin Rice (48.32).  Proof, if it were needed, that age is no barrier to record breaking improved performance, Aileen Baldwin took over a minute off  her own record form 2016 to finish in 63.03 mins.

The junior Curly Wurly rat runs, sponsored by Precision Pest Management, got off to a fast and furious start with the U9s racing to lead the way up the narrow path out of Penistone quarry. The first of the junior records fell as Wharfedale Harriers’ Hugo Bishop set a punishing pace to be first out of the quarry.  Showing off the power in his young legs, he maintained a good lead to win the race (2.30), taking 10 seconds off James Sadler-Townsend’s 2015 record. 2nd and 3rd boys were Calder Valley’s Harry Cliff (2.41) and Bingley’s William Johnson, 3rd, (2.47).  The second junior record was smashed as Keighley and Craven’s Bethan Buckley won the girls’ race in 2.39 mins, taking 8 seconds off the record set by Phoebe Midgley in 2015 and Lily McGuinness in 2006.  Proving that she is not to be messed with on the fells Buckley was also an impressive 2nd overall!  2nd and 3rd U9 girls were Wharfedale duo Isobel Patefield, 2nd, (3.16) and Elena Hooper, 3rd, (3.21).

In the main junior race, it was the Wharfedale duo of Jack Muir and Alex Thompson who led from the start.  Both are U17 runners, so they had a long race ahead of them, completing 2 laps of the course and 2 steep climbs out of the quarry before the very welcome sight of the finish funnel. Muir and Thompson locked friendly horns in a battle for supremacy.  Muir was first out of the quarry but Thompson caught him up during the early stages and never looked back, winning the race (11.09) from Muir (11.20) and Keighley’s Eric Beaumont, 3rd (11.53).  Ilkley duo Poppy Anderson and Bernadette Raven battled hard for 1st place in the girls’ race with Anderson taking the title (12.57) from Raven (13.07) and Wharfedale’s Emily Jones, 3rd (13.32).

U19 race winner was Wharfedale’s Logan Hargreaves-Madhas (14.22) and the girl’s winner was Todmorden Harriers’ Rebecca James (14.54).

After the races, all runners were able to take part in a very different competition in the legendary chocolate throw-out where the ability to catch flying candy is of far greater value than running ability.