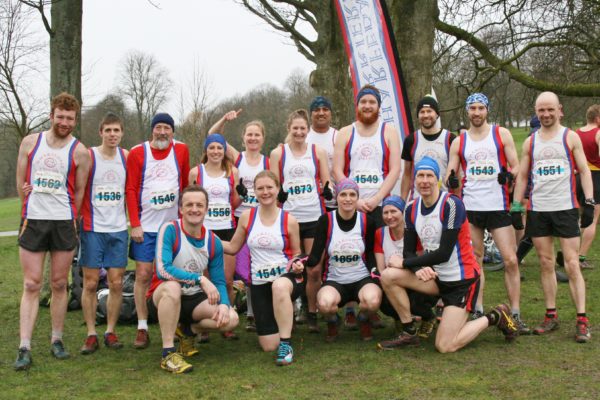 There was a great turnout for the final Peco XC league race to ensure we could seal promotion. The sun was shining at least at the start but we then experienced a few showers, the ground though was relatively firm.
For this race the seniors all set off together, first round Soldiers’ Field and then off through the woods.

In the mens race Lee Athersmith, Sam Watson, David Driver, Christian Holmes and Nick Charlesworth were all in the top 20 which ensured we finished top of Division one and so will be in the Premier League for next year. In the vets category having been promoted last season we finished 3rd in the Premier league which is a great result for our first season in the top league.

The ladies also pulled out the stops for the final race, to ensure they won their division again at this race, to finish 2nd in the table and also gain promotion, with Monica Emma and Katherine finishing in the top 50.

In the junior races boys, we also had a good showing where Alex Thompson, Logan Hargreaves-Madhas and Will Thompson once again dominated the 2 mile, finishing 2nd, 4th and 5th overall but with Alex then overall year 7-9 champion with 4 category wins and Logan year 10-11 champion and Will 2nd.