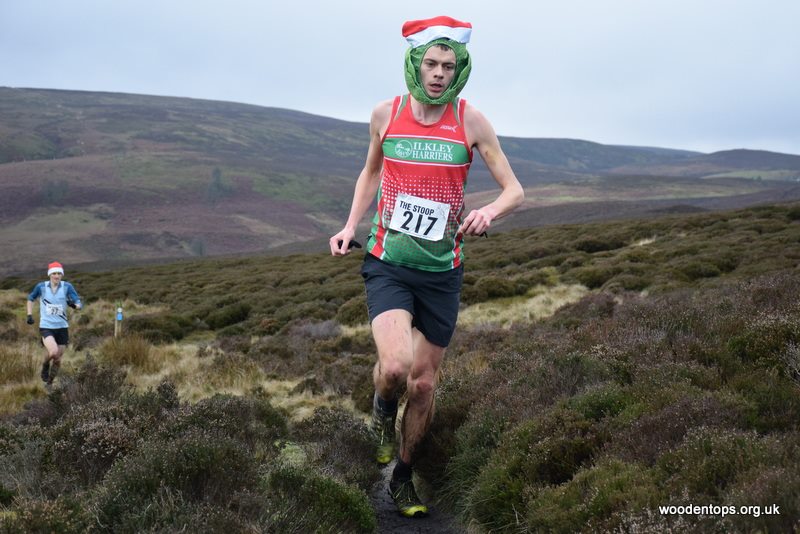 Despite bleak conditions the previous day, and frozen ground in places, the weather relented somewhat and the sun even showed its face a while resulting in several new records for the seniors. The senior race was won by Ilkley Harriers Jack Wood in a time of 30:27, with Nicola Jackson of Ribble Valley being first Lady. Ian Holmes of Bingley set a new V50 record of 31:59 and Ken Taylor of Rossendale set a new V70 record of 46:30

Local fellrunning legend Jack wood (Ilkley Harriers) donned his festive sprout headgear and led the pack out of Penistone quarry at Sunday’s annual Stoop Fell Race.  Whatever the weather, this Christmas themed fell race has one piece of compulsory kit – the Santa hat, giving rise to the long chain of Santa’s running over Haworth Moor.  The freezing rain of Saturday gave way to much more favourable bright sunshine and light breeze for the race.  However, the rain and cold temperatures overnight did lead to some areas of deep bog and frozen ground.  As some of the early finishers reported – you just couldn’t tell whether your foot would hit rock hard, frozen mud or sink into bog.  Even the legendary waist deep bogs on the descent from the Stoop were unpredictable in nature with some runners sinking while those next to them skated over frozen ground.  In many ways, the only predictable parts of the race were the mad charge out of the quarry and up the track past Drop Farm.  Vital positions can be lost and gained in this early part of the race as what follows is a long, single file yomp though heather moorland before reaching the much wider track leading to Harbour Lodge.  From there, the race is a muddy battle with terrain and the elements until the sting in the tail of a long up-hill haul to the very welcome finish line.

Despite Wood’s early lead, Rossendale’s Sam Tosh ran hard to threaten his lead as the 2 battled their way around the course.  In the end Wood dominated the race to win in 30.27 from Tosh, 2nd (30.33) and Pudsey and Bramley’s Harry Holmes 3rd (31.15).

In the ladies race, Ribble valley’s Nichola Jackson proved yet again that she is a force to be reckoned with as she stormed home to win the ladies race (36.03) a long way in front of 2nd place York Knavesmire’s Nik Tarrega (37.31) and Calder Valley’s Lucy Collins, 3rd, (39.17).

U19 runners have the option of running the junior quarry runs or the full senior race.  This year, the “newly qualified” Wharfedale Harriers duo of Will Thompson and Emily Jones made the transition look easy as Thompson was 1st U19 male (38.29) ahead of Tom Stoker (42.48) while Emily romped home as 1st U19 and 10th lady overall (42.06).

The junior quarry runs took their usual format of the mad dash along the quarry bottom before the steep climb out of the quarry to the rest of the race.

The U9s are the first to race and this edition was won by Calder valley’s Harry Cliff (2.41) from Keighley and Craven’s Oscar Timbers (2.47) in a thrilling sprint finish.  Timbers had led all the way but Cliff found a crucial spurt of energy on the final climb out of the quarry and stormed home as winner.  3rd boy was Settle Harriers’ Carl Sanderson (2.52).

The youngest of the Buckley running dynasty, Bethan, sped round the course to come 3rd overall and win the girls’ race (2.48) from Wharfedale’s Isobel Patefield (3.14) and Ilkley’s Iris Smith, 3rd, (3.30).

In the U17 race, Wharfedale club mates Jack Muir and Alex Thompson ran round the double lap course together and crossed the line in a dead heat win (11.24) from Sale Harriers’ George Safranauskas (12.16).  Ilkley’s Poppy Anderson won the girls’ race (13.32). 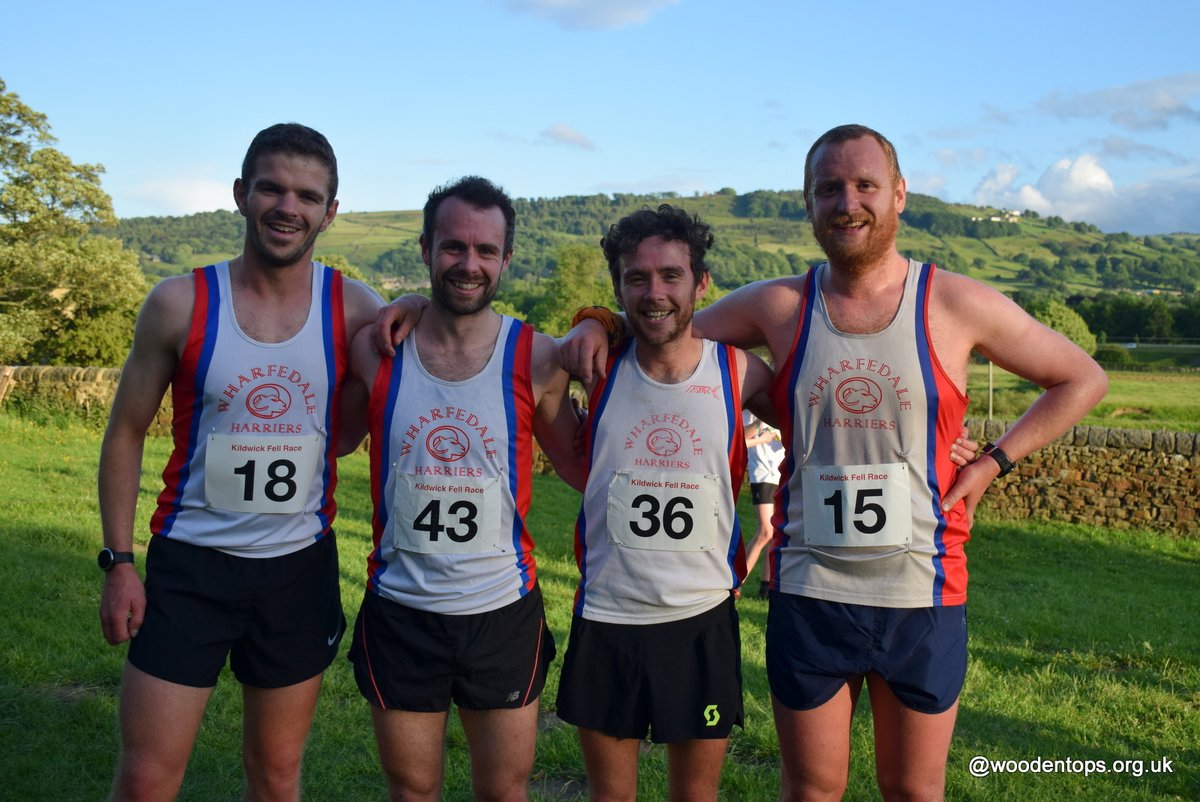 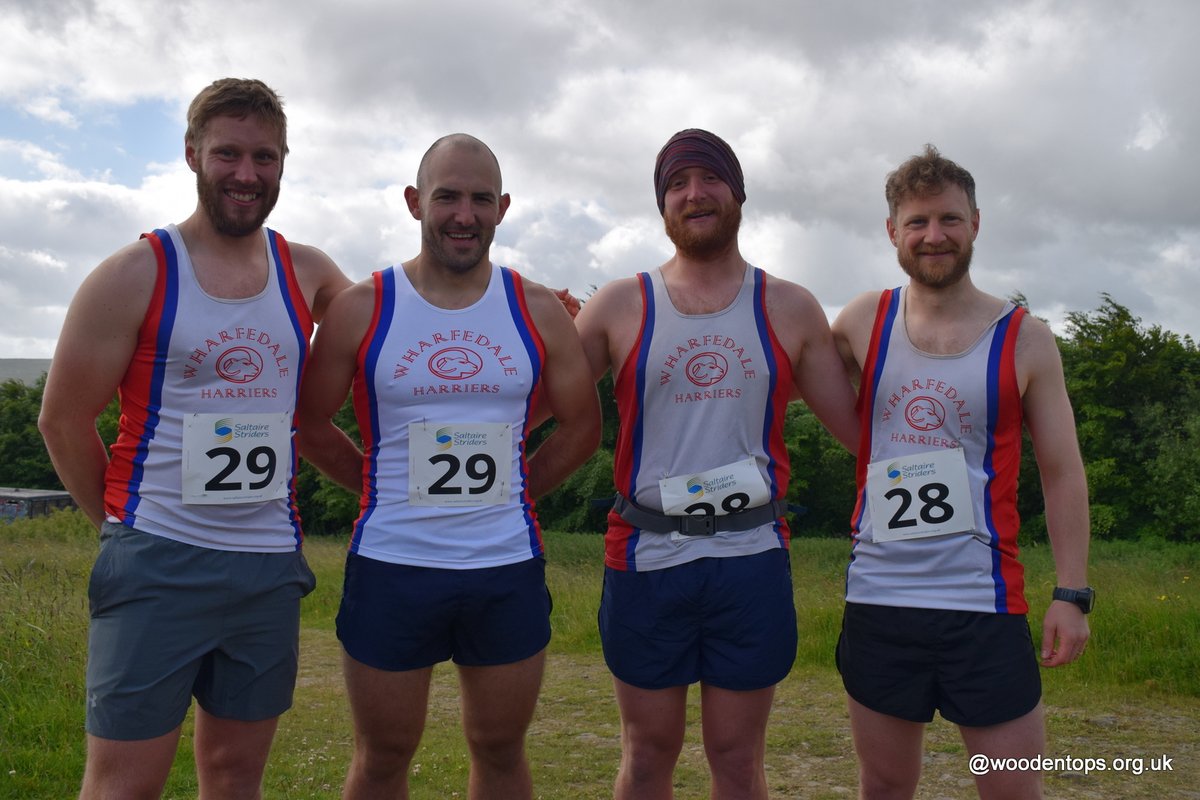 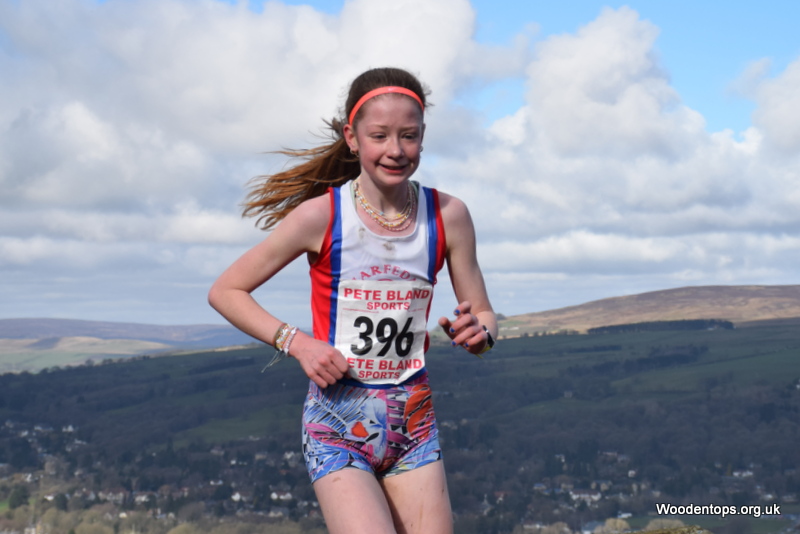