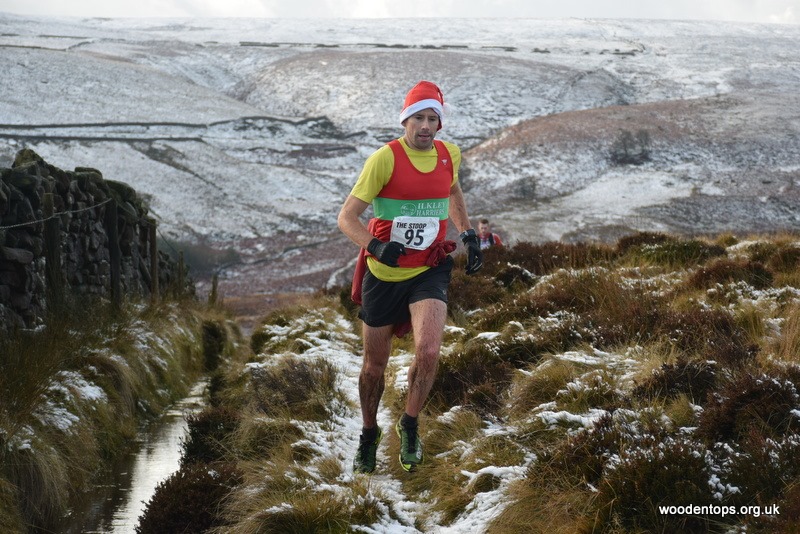 Despite a covering of snow on the tops 190 Seniors and 70 Juniors turned out for the 2019 Stoop fell race. First man was Tom Adams of Ilkley Harriers in a time of 35:20 followed closely by Robin Howie of Wharfedale Harriers in 35:34. First lady back was Nichola Jackson of Ribble Valley Harriers in 39:28. Both team prizes were claimed by Ilkley Harriers. Whilst it was a somewhat cold day, the seniors that ventured out were rewarded with a picturesque snowy skyline and one runner was even seen to stop for a moment to take some pictures of the view.

A wintery, seasonal dusting of snow gave this year’s Stoop Fell race that extra Christmas appeal, to add to the compulsory “Santa” hat for all runners. The moors above Haworth can always be described as moody, the snow lending atmosphere and challenge to this romp around Haworth Moor to the legendary Stoop boundary stone and back to Penistone Quarry.Despite the snow, and perceived chill, conditions underfoot were surprisingly soft giving bounce to runners’ step but also being muddy enough to slow competitors as they challenged each other and the elements.
At the head of the senior race, established fell running legend Ilkley Harriers’ Tom Adams was pushed all the way by up and coming star Wharfedale Harriers’ Robin Howie. They tussled and battled all the way round with Adams finding the better line to the Stoop and forging ahead to win the race in 35.20, a mere 14 seconds ahead of Howie, 2nd, (35.34) and Pudsey and Bramley’s Rob Hope 3rd, (36.03).
The ladies race was no less of a battle as some current fell running stars locked horns in a friendly battle around the tussocky moorland. Ribble Valley’s Nichola Jackson, who has represented England and Great Britain in mountain running, stormed home to repeat her win of 2018 (39.28) finishing 19th overall. Local heroine and another England star of mountain running, Todmorden Harriers’ Annie Roberts finished 2nd (42.22) ahead of Ilkley Harriers Lucy Williamson, 3rd, (44.23).
The U21 men’s race was won by Rossendale’s Charlie Taylor (40.45) from Keighley and Craven’s Eric Beaumont, 2nd, (41.55). Beaumont only ran the senior race as he missed the start of the U19 Quarry run, making his 2nd place ranking all the more impressive. 3rd U21 male was Fellandale’s Ben Hancock (49.07).
Wharfedale’s Emily Jones , who won the U19 race in 2018, returned to take the title in the U21 ladies race (45.32), finishing 4th lady overall. 2nd U21 lady was East Cheshire Harriers’ Lily McGuiness.
In the veteran categories, 3rd placed Robe Hope took the male vet 40 title with Ilkley Harriers’ Kate Archer taking the LV40 title (45.51).
Local legend, Bingley Harriers’ Ian Holmes took the MV50 title (38.00) with the well-travelled Huntingdonshire’s Alison Fox taking the LV50 prize.
Leeds Bradford Triathlon’s James Cunningham left his wet suit at home and took the MV60 title (47.50) whilst Doncaster’s Caroline Wheelhouse was 1st LV60 (53.57).
The seasoned Ken Taylor of Rossendale Harriers returned to repeat his win of 2018 to be 1st vet 70 runner in an impressive 53.16 mins.
The junior Quarry Runs took their now familiar format of a muddy mad dash along the bottom of the old Penistone Quarry and the steep climb out to commence the age dependent routes ahead. For the main junior race, the icy conditions necessitated a detour away from the pond, along a track at a higher level, making the race a little bit longer but safer on the day.
The U9 race is the first to depart and had a distinct tinge of Deja Vue as Calder Valley’s Harry Cliff repeated his victory of 2018 to win the U9 race (2.49) from Ilkley’s Robert Carter, 2nd, (2.54) and Wharfedale’s Dylan Alcock, 3rd, (3.22). The girls’ race was won by Ilkley’s Harriet Carter (3.31) from Mercia’s Bleu Bailey (3.49) and Calder Valley’s Charlotte Cliff, 3rd, (4.07).
Keighley’s Zac Jardine won the U11 race (7.33) from Ilkley’s Oliver Holder, 2nd, (8.07) and Bingley’s William Johnson, 3rd, (8.46).
Calder Valley’s Clara McKee finished 2nd U11 overall to win the girls race (7.38) from Keighley’s Bethan Buckley (8.13) and Bingley’s Abby Clay, 3rd, (8.28).
Moving up an age bracket proved to be no hurdle for Keighley’s Archie Peaker as he romped home to win the U13 boys’ race (7.01) from Calder Valley’s George McFie, 2nd (7.12), and Ilkley’s Alexander Wolfenden, 3rd, (7.23).
Barlick’s Lucille Pickles won the girls race (8.06) form Keighley duo Milly Timbers, 2nd, (8.32) and Lara Brown, 3rd, (9.04).
Bingley’s Theo Clay won the overall junior race and the U15 boys’ race (6.58) from Calder Valley’s Euan Logue (7.29) and Ilkley’s Dylan Shinn, 3rd, (7.43).
At the end of a season that has seen her win many races outright, Wharfedale’s Amelie Lane came home 2nd in the U15 race to win the girls race (7.28) a full 30 seconds ahead of Ilkley’s Erin Doyle, 2nd, (7.58) and Holmfirth Harriers’ Annie McLean, 3rd, (8.04).
The 2 lap U17 race was won by Otley’s Jenson Brogden (12.45), who also proved that moving up an age bracket is no barrier to success, having won the U15 race in 2015. Pudsey and Bramley’s Declan Walker came 2nd (13.35) ahead of 3rd placed Bingley’s Owen Pacey (15.06).
Coming 3rd overall, Wharfedale’s Alice Jones was 1st U17 girl (13.43).